There are several ways to practice martial arts. Different methods have been developed since ancient times, although in modern world new methods arise. Some methods are harder than others or have different focus. Some martial arts focus on fighting against one opponent instead of others that focus fighting against many opponents, for example. It depends on the history, evolution, and the goal of each one. Still, the place that you train and the master influence it.

Usually, I do not like to split martial arts in a set of specific features because it limits the understanding of the martial art itself, although it is a good way to remember something. Martial arts are not “static”, even when they have ancient/traditional structure because human being is not “static”. Living stuffs changes through the spacetime for any reasons.  After sometime, the training method changes according to culture, language, and regional features or needs, although the main principles remain intact. It is natural.

About two years ago, I was in a Bujinkan Taikai (“big meeting” or “big seminar” in Japanese) with Daniel Hernández Shihan from Bujinkan Tango Dojo (Argentina). He told us to learn the 型 (kata, main form), after that break it in different forms using the main principles (変化, henka, to change) and be free (that is a view of Shuhari principle, a Japanese way to learn martial arts). It has been taken seriously by my master Miguel Greg Sensei, we live that every day. The way that you train is revealed when you really need to use it.

Regarding life-threating incidents, they are very different to the training itself. In fact, it is impossible to reproduce a real life-threating incident (as it could surprise you) or real fights at the training hall. First at all, the feelings that you feel during a situation like that is completely different to your 乱取り (randori, free style practice or sparring training) feelings, for instance. Despite you have passed for one of that. Therefore, it is not possible to foresee the best way to react in a specific incident, even after tried to figure out it in terms of martial arts. There are many variables related to that (How many opponents? Do they have weapons? Where are the exists in this place? Is someone with me: wife, children…? etc).

According to the Bujinkan Grandmaster 初見良昭 (Mr. Hatsumi Masaaki) in his book “Unarmed Fighting Techniques of the Samurai”:

“Many people believe that knowledge is enough, but knowledge without courage ultimately leads to foolishness.” 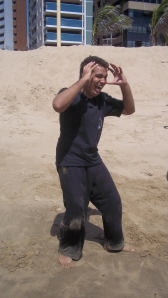 What you feel during a life-threating incident is very important (to the moment and after that) and unique. A didactic way to deal with it is thinking that your feeling is like a sense, such as: Sight, Hearing, Taste, Smell, and Touch that generates information about yourself. What you feel say many things about yourself. Many decisions are made based on these things (including do not react).

Connected to those moments, there is the Japanese principle: 気迫 (Kihaku).  It means “spirit”, “strong spirit”, “flourishing disposition”, “driver”, “determination”, “vigor” or “force”. There are other ways to write also with different meanings. It is a kind of explosion of your Self suppressing the will of your opponent, a kind of projection of the spirit. The “big bang” moment (despite the “big bang” is not considered an explosion). We are talking about feelings and everything around it, not just mental states. A complete 構え(Kamae, posture or attitude), including mind, body, and mainly heart. Furthermore, the connection with universe is a must.

Brazilian martial artists commonly are very aggressive, although it is changing. The country has violent history and a competitive culture (based on economic factors), which in turn impacts to society and the way of people think. The two main states (references) of martial arts in Brazil are Rio de Janeiro (RJ) and São Paulo (SP). Both have several violent incidents in history. Kihaku sometimes is confused with aggressiveness, but is not the case.

During all life you feel many different feelings. The way you live these feelings is frequently training yourself (which means: your brain, nervous system, heart/center etc).  Techniques of the 玉虎流骨指術 (Gyokushin-ryū Ninpō, “The Jeweled Heart School”) emphasize the use of Kihaku. In my view, Kihaku is very connected to the 空間 (kukan, fighting space) and急所 (kyusho, vulnerability or main point). After envelop opponent and find vulnerability (timing) you can enter with the feeling of “last chance”. Sometimes, it is enough to take a quick look to the opponent (as a reflex) to find that. Of course, Kihaku transcends it, requires heart changes, training, perception, connection with the opponent, and universe itself.

In “Japanese Sword Fighting” book, Hatsumi Sensei spreads the importance of Kihaku in Muto Dori Hiden (secret principle of the preparedness when face an armed opponent while not having a weapon). Most people look for To Ate no Jutsu (thundering cry technique) that provokes Fudo Kanashibari (when opponent is temporary paralyzed from a distance), a way of Ateki (strinking the spirit). If you have the opportunity to see, it really is very interesting, if you do not have, look for the Someya Kenichi Shihan reference published in Sanmyaku densho magazine (it was also published on Internet). However, To Ate no Jutsu is much more than Kihaku.

This subject is very complex because it is the foundation for several other principles of martial arts.